Archery gear, like golf clubs, bolt-action rifles, and other technical sports equipment can leave south-paws like myself feeling “left out” when looking at available options on the market. Since 90% of the population is right-handed and archery is not massively mainstream, most archery products are designed first for the right-handed shooter.

Being one of the only lefties at Apex Gear, I find myself often being the “left-handed guinea pig” tasked with field testing the left-handed version of many new archery products. Some products are designed as lefty-specific models, but often that makes it more difficult for dealers to keep appropriate inventory. Most archery products (from Apex Gear and from other companies) come as right-handed models that can be converted for left-handed use. Some of these conversions are extremely easy, and some can be a bit tricky. When setting up a new bow, it is important to know the difference so you can plan ahead, and so you don’t end up with a product that you think is lefty-friendly, when you really should have ordered a different sub-model.

Perhaps not the most glamorous item to start with, but a properly installed and tuned arrow rest is the heart of an accurate bow. For those just getting started or wanting to keep it simple, recommend the ACCU-STRIKE™ rest (AG720B). This is a capture style rest with no moving parts, built in the theme of “KISS” (Keep It Simple Stupid) making it easy to set up and inherently reliable in the field. This comes right-handed in the packaging but converting it to a lefty setup is about as easy as it gets – just one screw and flip it around.

For those wanting a drop-away arrow rest set-up it can get a bit more complicated. The ATTITUDE™ (AG730BK) is a solid drop-away option that runs extremely well once set-up. The process can be a bit tedious if you expect to just slap it on the bow and be ready to hunt. Fortunately, left-handed conversion instructions are included in the packaging, but be prepared to spend some time with small screws and springs. Once you take the time to do the conversion, you will be rewarded with the benefits of a sturdy drop-away rest: none of the reduction in arrow speed associated with capture-style rests, as well as clean and consistent arrow flight.

Bow sights can be very personal and are a category about which many feel strongly. Common are informal hunting camp debates about single-pin vs multi-pin sights, proper sight radius, etc. Like many things, there is not a right or wrong option; picking out a sight depends on personal hunting style.

Every Apex Gear sight comes right-handed out of the packaging, but fortunately they can all be converted to a left-handed configuration in just a few mintures. Generally, the complexity of the conversion is directly related to the complexity of the sight. Simpler sights don't have as many mechananical parts to adjust and convert. For simple multi-pin designs (like the ACCU-STRIKE™ and the TUNDRA™ series) you could technically just mount the sight upside down and make it work, assuming you have enough adjustment range. But if you are like me, you want to do it right (no pun intended). Converting this type of sight is easy – completely loosen the windage adjustment, remove it, flip over the aperture and windage section (the mounting bracket remains unchanged) and reinstall the aperture and windage plug on the other side of the bracket. Run the fiber back through the bracket. The level will now be visible in the top of the aperture. It can be moved if desired but repositioning the level is not required—this is personal preference.

Micro-adjustable multi-pin bow sights use a similar procedure to convert for left-handed use. The only other additional concern is that now the elevation control knob is under the sight instead of on top. Many don’t mind, and won’t bother to change it, but if you want to change it back to the top position, it can be done without much difficulty. I have created a video to explain this process.

The COVERT™ family of moving pin sights (COVERT Pro, COVERT Single-Pin, and COVERT Four-Pin) can also be switched over. The big picture is the same—flip the sight over so that the aperture is on the correct side of the riser, then convert individual parts as needed. In addition to switching the mounting bracket, the aperture will also need to be switched over to the other side. The tape calibration system will now be upside down, but don’t worry it still works in the same way—just turn the tapes around. Shorter distances will be at the bottom of the tape (with the pin up pretty high), and longer distances will be at the top (moving the pin downward). Make sure to move the end-of-travel stop to the other side of the sight. Remember, this safety feature is a bottom-out system to prevent dropping too low and contacting your vanes.

Mounting a good hunting quiver is another case where the lefty setup can require some extra steps or be ready to go right out of the packaging. Let’s start with the simple options: The ACCU-STRIKE™ and REACTOR™ LTE; both are compact, symmetrical designs that sit right on the riser with a quick-detach system. They have some different features, but the mounting is essentially the same. Just mount the QD plate to the left side of your bow and you are ready to go.

The REACTOR XL looks a bit like the REACTOR LTE model but mounts completely differently. This quiver uses an offset bracket that keeps the weight centered further back towards the cams, rather than forward on the riser. The process is not too tricky but does require taking some things apart and putting them back together. Once again, I put together a video to demonstrate this process.

Fortunately, everything else on the bow is generally ambidextrous, but if you call our customer service department looking for a left-handed peep sight it may give them a well-deserved chuckle. Peeps, d-loops, string silencers, and nocking points all work the same, regardless of being on a left-handed or right-handed bow. Pick out options based on features and enjoy the freedom of not having to switch anything around.

String twist direction and arrow fletching direction (left helical vs right helical) can vary between a left-handed bow and right-handed bow (though they don’t have to) but that is another can of worms for another day.

With so many options, bow setups can be deeply personal and as stated before there is no right or wrong setup. Individuals must consider the type and size of game they are hunting, size and weight constraints of equipment, technical vs simple products (and the tuning and mainainence that goes with them), aesthetics, and several other factors. When I went to put together my 2019 Hoyt® Helix, I had to think through much of this. I consider myself to be technically and mechanically inclined—probably much less than the professional competitive target archer, but at least in line with most backcountry bowhunters. My picks went more towards the performance side of things rather than the easiest and lightest solutions. For my personal style of public land “hike it in” hunting, I needed all my gear to be rugged and versatile. 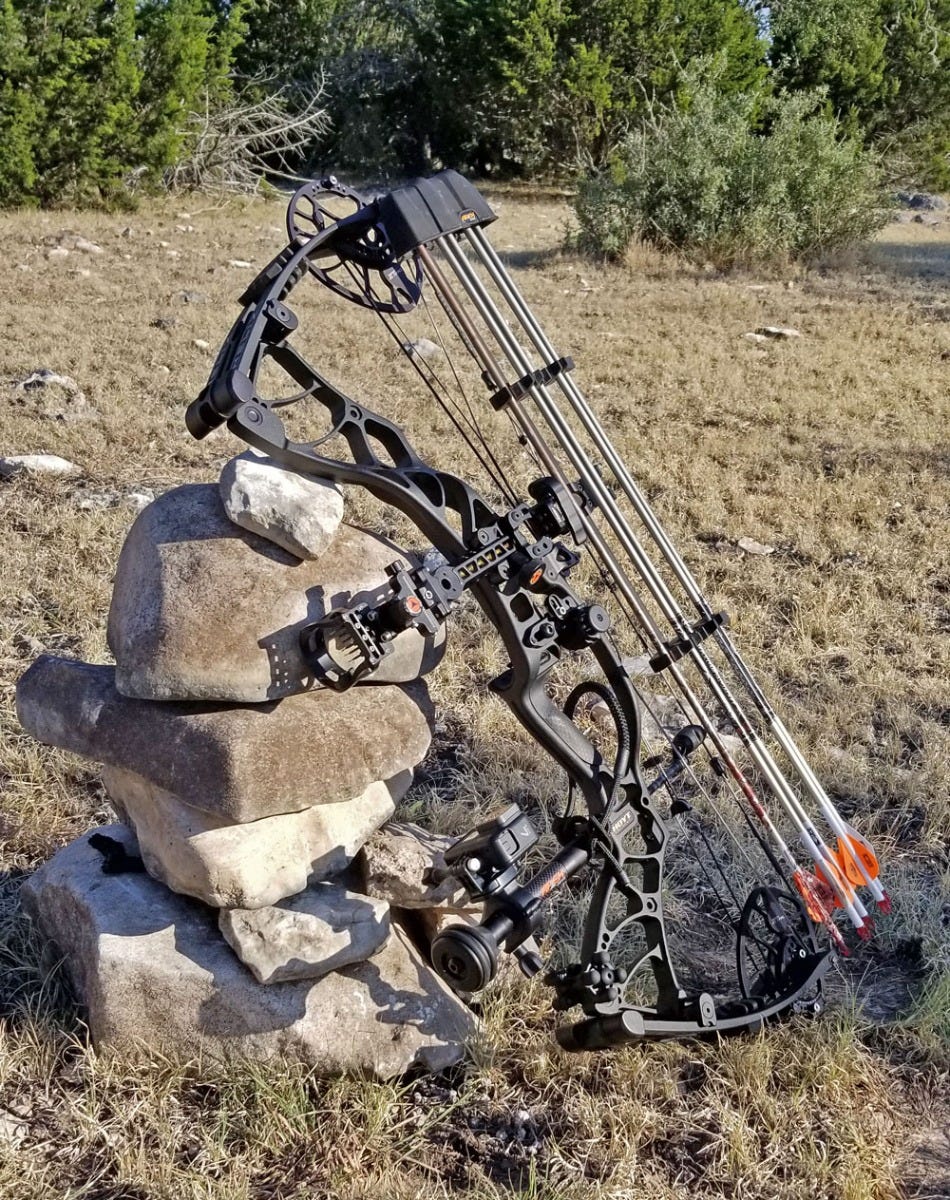 Here are the accessories I used for my bow build::

SIGHT: ATTITUDE™ 7-Pin with detachable bracket (Model No. AG4817BKD). I changed up my pins a bit and am running this sight as a 6-pin. With fairly heavy arrows (490 grains) and 65-pound draw weight, 6 pins fit nicely in the aperture, but 7 did not. I could force 7-to work (by slightly increasing the draw weight or changing my pin assignments) but I am not realistically going to use an 80-yard pin in my style of hunting. A helpful hint here – you can always add or remove pins but removing is generally easier than adding. If you want a 6-pin sight, it is better to start with the 7-pin version and subtract, rather than starting with the 5-pin sight and adding a pin.

QUIVER: REACTOR™ XL quiver (Model No. AG240B). I'll admitIt is not the lightest option and did require a few steps to switch to a lefty setup, but I love the way this quiver sits further back, providing good balance. One important thing to note: the gripper design on this quiver also allows the first arrow to pull out towards the shooter. I really appreciate this feature and count on it for my second arrow in case I need a follow-up shot. This is where taking the time to flip everything around is worth it for lefties.

ARROW REST: SURGE™ click-up arrow rest (Model No. AG750BLH). I have been the left-handed tester on this product for nearly a full year before the SURGE was available on the consumer market. It was easy to install and did not require any additional steps for left-handed use (since it is available in dedicated left and right-handed models). This rest has weathered Texas dust, and Idaho ice and snow. It drops every time, but never lets me down.

STABILIZER: END-GAME™ 8 in. stabilizer (Model No. AG815B). There's nothing particularly left-handed about this item, but I find it very helpful for balance and holding steady at longer ranges. As an added benefit, I found that the carbon-fiber tube of this stabilizer works well with the GoPro® handlebar/pipe mount for filming some of my hunts.

WRIST SLING: ATTITUDE™ sling (Model No. AF441BB). There are differing opinions on proper grip and the use of a wrist sling. I find myself in the camp of “less human input means greater accuracy”. The wrist sling helps move that balance to my wrist and use only a very minimal grip, reducing my chances of torqueing the shot with too much grip pressure.

For the bow and all of the accessories, I set it up in "Ford model-T black". I use different camo patterns for different seasons and locations, so there is not an obvious camouflage choice for my bow. I am not particularly concerned with the camo pattern of the bow, and I feel the flat black finish gives my hunting rig a sleek, modern, and "fast" look. 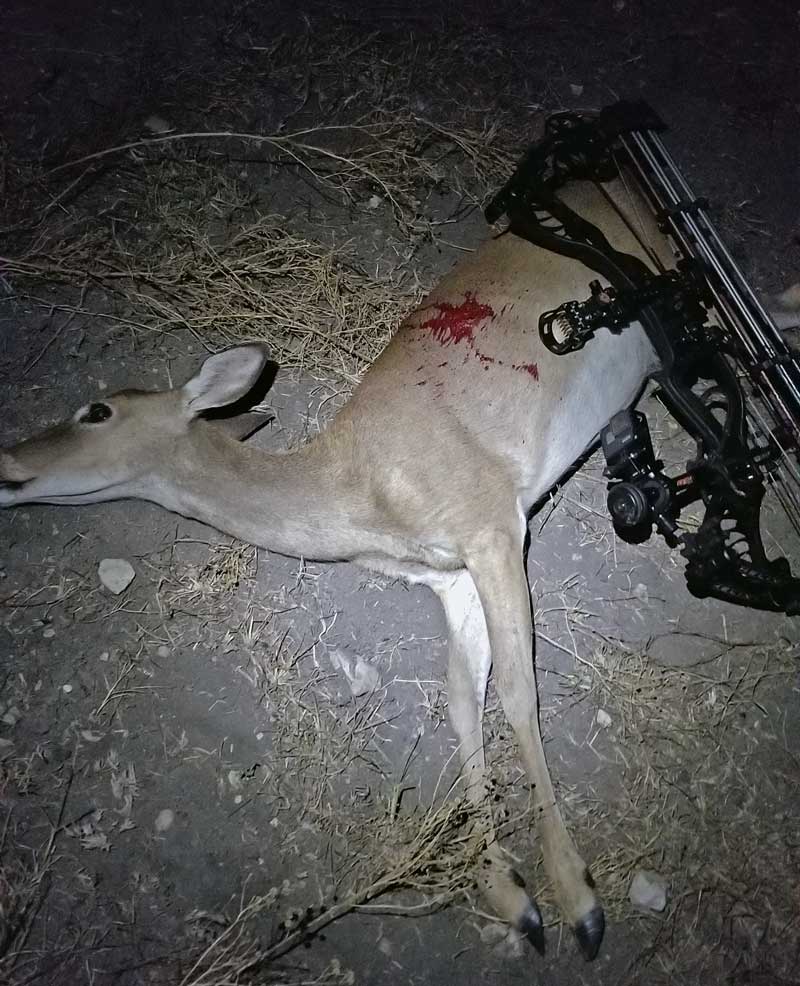 This setup has been a joy to shoot and has not been too hefty to carry around in the field. Unfortunately, I was never quite close enough to an elk on my Idaho elk hunt in September to test this set-up on a large mountain critter, (though I a very confident it would have handled exactly as desired). So far, I have harvested two feral hogs and two whitetail does in Texas with this set-up. The season is still young, so I look forward to shooting it more.

Good left-handed gear used to be much more limited, but things are getting better for south paws. Hopefully this gives you some products to consider for the next bow build or upgrade and provides some helpful information about left-handed bowhunting equipment.